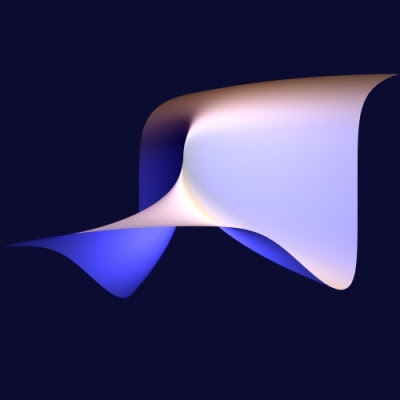 I've been thinking of a way to describe the interaction between genes, environment, and phenotype qualitatively as a mathematical surface.

In my opinion, current expressions of "heritability" represent something like the partial derivative dz/dx at x=0 and y=0; or perhaps, since the calculation is based on a population sample, heritability would be the average of derivatives dz/dx over various sampled (x,y) points near x=0 and y=0.

Conventional heritability calculations give a severely limited portrait of the role of genes on phenotype, since it condenses the information from what is really a 3-dimensional surface into a single number (the heritability). This is like looking at a sculpture, then being told that the sculpture can be represented by a single number such as "0.6", based on the average tilt on the top centre of the artwork.

A more comprehensive idea of heritability would be to consider that it is the gradient, a component of which is dz/dx. This gradient would not be a fixed quantity, but could be considered a function of x and y.

It is particularly interesting to me to consider other properties of this surface, such as what is the derivative dz/dy at different values of y and x? This would determine the ease with which environmental change could change a phenotype regardless of genotype.

A variety of different shapes for this surface could occur:

1) z could plateau (asymptotically) as y approaches infinity. This implies that the phenotype could not be changed beyond a certain point, regardless of the degree of environmental enrichment.
2) z could appear to plateau as y increases, but this is only because we do not yet have existing environments y>p, where p is the best current enriched environment. It may be that z could increase substantially at some point y>j, where j>p. I believe this is the case for most medical and psychiatric problems. It implies that we must develop better environments. Furthermore, it may be that for some genotypes (values of x), z plateaus as y increases, but for other genotypes z changes more dynamically. This implies that some people may inherit greater or lesser sensitivity to environmental change.
3) dz/dx could be very high near the origin (x,y)=(0,0), leading to a high conventional estimate of heritability; but at different values of (x,y), dz/dx could be much smaller. Therefore, it may be that for some individual genomes or environmental histories, genetic effects may be much less relevant, despite what appears to be "high heritability" in a trait.
4) dz/dx could be very low near the origin, but much higher at other values of (x,y). Therefore, despite conventional calculations of heritability being low, there could be substantial genetic effects on phenotype for individuals with genotypes or environmental histories which are farther from the population mean.

The idea of x itself being fixed in an individual may also not be entirely accurate, since we now know of epigenetic effects. Also, evolving technology may allow us to change x therapeutically.

In order to describe such a "surface", many more data points would need to be analyzed, and some of these might be impossible to obtain in the current population.

But I think this idea might qualitatively improve our understanding of gene-environment interaction, in ways that could have practical applications (current heritability estimates are typically 0.5 for almost anything you can think of--this fact seems intuitively obvious, but is not very helpful to inspire therapy or change, can sometimes increase a person's sense of resignation about the possibility of therapeutic change, and can distort understanding about the relative impacts of genes and non-genetic environment).
Posted by GK at 1/06/2010

I am impressed with your theory of gene therapy in this blog. I am sure you are competent in this field. Success for you. Thank you.