This is the first of a series of posts I've been planning based on Daniel Kahneman's book Thinking, Fast and Slow.

I found this book to be excellent, an account of how the brain is very biased in its mode of forming decisions and judgments, loaded with very abundant solid research over 40-50 years in the social and cognitive psychology literature.

My purpose of reflecting on this book in detail is hopefully to add ideas about understanding the brain's biases in the context of psychiatric symptoms, and then to propose therapeutic exercises which could counter or resolve the biases, and strengthen cognitive faculties which may intrinsically be weak.

The first few chapters of this book are introductions to the idea that the brain can be understood as having two main modes of processing and responding to information; the author calls these "system 1" and "system 2."

System 1 is rapid, automatic, reflexive, and often unconscious.  It is the dominant system in most cases.  It is the foundation of "intuition."  It is built upon deeply engrained memory for similar situations.  It is a foundation of all talent and mastery of skills, in that it permits one to perform a difficult task with ease, without even having to "think" about it (e.g. for a master musician, athlete, surgeon, or really any other occupation).  But system 1 is extremely prone to biases.  Its mode of processing data is based on what it has experienced repeatedly in the past -- so it is a kind of autopilot -- and it can be very easily fooled  (yet, on the other hand, its rich set of past associations may be a fertile ground for imagination, creativity, and inspired insight).

System 2 is a highly conscious, intellectually analytical mode.  It permits us to systematically solve a multi-step difficult problem of any sort.  It permits us to cope with situations which differ from an overlearned template.  It would be like the true pilot landing a plane in difficult or rapidly changing conditions, instead of letting the autopilot trying to land it.

One of Kahneman's main theses is that system 2 can be easily fooled too!  While system 2 is the only cognitive mechanism which could prevent biased interpretation of information, Kahneman shows that system 2 is intrinsically "lazy."  Because engaging system 2 is effortful -- it demands energy -- we are strongly drawn to intellectual processes which minimize the energy expenditure.  If system 1 has an automatic, "intuitive" answer for us, then we would tend not to engage system 2 at all.  And if a rapid engagement of system 2 appears to be sufficient to get an answer, we will usually not spend extra time or energy.  Thus system 2 can easily lead us to a premature and inaccurate conclusion.

Another of Kahneman's main theses has to do with the nature of phenomena, cause-and-effect, and data in general.  Accurate conclusions about cause and effect often require a type of statistical analysis (even a simple one, employing quite straightforward rules of probability), but Kahneman shows that the brain (both system 1 and system 2) are not intrinsically designed to think in a statistical fashion.  Therefore we tend to greatly distort the likelihood of various types of events.

An area I would want to extend beyond Kahneman's main theses is that I suspect both system 1 and system 2 could be very specifically trained to reduce biases.  Kahneman seems somewhat resigned to conclude that the brain simply can't resist the types of biases he describes (citing, for example, profoundly biased thinking in his psychology student subjects--or even in himself-- whose biases were evidently not reduced by understanding and education).  But I do not see that very much work has been done to very specifically and intensively train the mind to reduce biases -- I think that simply learning about bias is not enough, it is something that must be practiced for hundreds of hours, just like any other skill. (this reminds me of something said in psychotherapy:  "insight alone is not enough to effect change -- it must be accompanied by action.")

I believe this is relevant to psychiatry, in that all mental illnesses (such as depression, anxiety disorders, personality disorders, psychosis, and attention/learning disorders) contain symptoms which affect cognition.  In  cognitive therapy theory, it is assumed that depressive cognitions cause and perpetuate the mood disorder.    Many such "cognitive distortions" could be looked at through the lens of "system 1" and "system 2" problems.    For example, in many chronic symptom situations, system 2 may have developed a very deeply ingrained reflexively negative expectation about a great many situations, with many of these reflexes being unconscious.  These reflexes could possibly have been developed based on childhood experience of parents (consistent with a sort of psychoanalytic model), but I think the most prominent source of such reflexes would simply be due to having had a particular symptom frequently for years or decades at a time, regardless of that symptom's original cause.    Under such conditions the brain would change its expectation about the outcome of many events, based on the repeated negative experiences of the past (which could have been due to poor external environmental conditions, but also simply to the past chronicity of symptoms).

A proposed treatment for this phenomenon could very much be along the lines of cognitive therapy.  But I might suggest extending a specific focus on depressive "cognitive distortions" etc. to work on understanding and countering bias in systems 1 and 2 in general.  I propose that intellectual exercises to minimize biased interpretation of perceptions -- even if these exercises have little directly to do with psychiatric symptoms or depressive cognitions, etc. -- could be useful as a therapy for psychiatric disorders.

As outrageous as it seems, educating oneself about statistics, and practicing statistics problems repeatedly -- may be therapeutic for psychiatric illness!

I'll try to continue this discussion with more specific examples in later posts.
Posted by GK at 5/10/2012 1 comment:

Blueberries are good for your brain 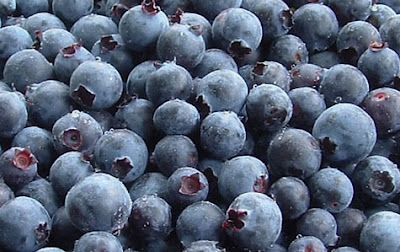 Another study published in 2012 about dietary berry intake associated with slower rates of cognitive decline:
http://www.ncbi.nlm.nih.gov/pubmed/22535616

Here's a reference to a 2010 article by Krikorian et al. published in The Journal of Agriculture and Food Chemistry:
http://www.ncbi.nlm.nih.gov/pubmed/20047325

The article describes a randomized, placebo-controlled study in which 9 elderly adults were given about 500 ml/day of blueberry juice, with another 7 given a placebo fruit juice without blueberries. The study lasted 12 weeks, at which time cognitive and mood tests were administered.

Here's a reference to another review article on this:
http://www.ncbi.nlm.nih.gov/pubmed/18211020

The authors allude to other studies showing improved cognitive performance in animals given blueberry supplementation.

In the meantime, it seems quite sound advice to include more blueberries in your diet. An excellent snack food, a much healthier alternative than junk foods such as chips or candies, etc.
Posted by GK at 5/09/2012 2 comments: