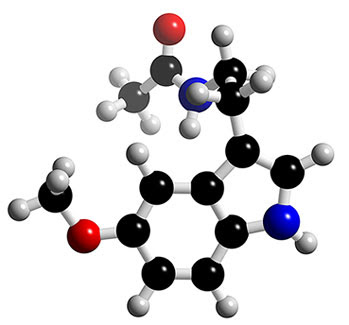 Melatonin is a hormone synthesized in the pineal gland, and is thought to be important in the regulation of circadian (day-night) rhythms.

It has been used to treat insomnia and sleep-phase abnormalities.

The most interesting study I found regarding long-term use of melatonin was published in JAMA in 2008: http://www.ncbi.nlm.nih.gov/pubmed/18544724
In this prospective, blinded study, elderly patients with dementia were given 2.5 mg melatonin near bedtime, over an average of 15 months of follow-up. Patients in another group were exposed to bright light during the day (approximately 1000 Lux indoors, from 10:00 AM to 6:00 PM). A third group received both melatonin at night and bright light in the day. Placebo groups received no melatonin, or were exposed to typical indoor office lighting, of about 300 Lux.* Interestingly, caregivers were not able to tell whether their site had the ordinary lighting or the bright light (the increased light intensity was measurable with a meter, but was not noticeable subjectively).
The results showed that melatonin consistently improved sleep, particularly helping reduce the time required to fall asleep, and increasing total sleep time.

The group exposed to bright light in the day, plus melatonin at night, did not show worsened mood.

The authors conclude that bright light in the day helps with mood, cognition, and function in elderly dementia patients. Melatonin alone helps with sleep but has a negative impact on mood. Bright light plus melatonin had a positive impact on all the symptoms studied.

Based on this study, I would encourage anyone using melatonin at night to ensure that they get plenty of bright light during the daytime. It also suggests that any study looking at melatonin treatments should also consider daytime bright light exposure as an important variable which could affect response to melatonin.


Here's a reference to a study showing that 2 mg of sustained-release melatonin improves sleep:
http://www.ncbi.nlm.nih.gov/pubmed/18036082

In this study, children with intellectual disabilities experienced relief of their insomnia (including reduced time to fall asleep, reduced time awake, and increased total sleep time) with 5 mg melatonin supplementation over a 4-week period:
http://www.ncbi.nlm.nih.gov/pubmed/18261024

Here's a study showing improved sleep, with no adverse effects, due to melatonin administration to autistic children:
http://www.ncbi.nlm.nih.gov/pubmed/18182647

Here's a study showing improved sleep in children with epilepsy who were treated with adjunctive melatonin (6-9 mg). There were no significant side-effects:
http://www.ncbi.nlm.nih.gov/pubmed/15794175

This study showed improved sleep in adolescents with ADHD, when they were given 5 mg melatonin over a 30-day trial. However there was no improvement in ADHD symptoms:
http://www.ncbi.nlm.nih.gov/pubmed/16670647

Melatonin has been associated with autoimmune conditions. Here is a case report associating melatonin use with autoimmune liver disease:
http://www.ncbi.nlm.nih.gov/pubmed/9412927

Yet, in various other reports, melatonin has been shown in animals to protect the liver from various forms of artificially-induced toxicity. (e.g. http://www.ncbi.nlm.nih.gov/pubmed/15386534)


In conclusion, melatonin appears to be have a reasonable safety profile, and is a potentially effective treatment for insomnia, particularly "initial insomnia" in which there is difficulty falling asleep at the beginning of the night. Typical doses of melatonin range from about 2 mg - 6 mg.

The one main concern about adverse effects concerns possible exacerbation of autoimmune diseases such as rheumatoid arthritis, although the evidence is not clear on this point. Other types of toxicity, while possible, appear to be rare. Melatonin may even protect cells from a variety of different types of harm. But it is important to recognize the possibility that there could be other unknown adverse effects over long periods of time.

As with any treatment, we have to balance risks against benefits: insomnia itself clearly has a variety of negative long-term health effects (ranging from increased risk of physical and psychiatric illness, to increased risk of accidents). Other treatments for insomnia have their own risk/benefit profiles.

Cognitive-behavioural therapies for insomnia are clearly the safest and most beneficial, and should be optimized before any other medical therapy. But it appears to me that melatonin ought to have a place in the medical treatment of insomnia, alongside other established therapies.

Garth - what about the uses that melatonin has in regards to jet lag and circadian rhythm shifts...

Here's a reference to a 2002 Cochrane review, which supports the use of melatonin to treat jet lag (to be taken at the desired bedtime in your destination's time zone):
http://www.ncbi.nlm.nih.gov/pubmed/12076414

A brief survey of the literature on sleep-phase disorders, such as those secondary to shift-work, reveals a possible role for melatonin treatments. There are some negative review studies, but these are based on old research. It seems to me that more practical research is needed on this. I would say that if lifestyle change and CBT are not working to help with this type of problem, then something like melatonin seems a more benign agent to try, compared to most prescription sedatives.

Good post! I've used melatonin daily (nightly) for 5 years after I FINALLY was diagnosed with DSPS, and agree with most of what you say. My sleep specialist, also a psychiatrist, told me not to start using melatonin (on prescription here) before acquiring a light box. The point is bright light on (natural, spontaneous) awakening - not necessarily all day long. It banishes melatonin from the blood, as otherwise one is likely to trick the body into believing nights are 14 hr long, an effective way to get depressed.

What I don't agree with is high dosage of melatonin for sleep adjustment purposes. Why 3, 6 or 9 mg, when one half mg does the job?

I've used upwards of 30 mg of melatonin at times - I'd rather use a dose that big than take some sort of psychopharma sleeping pill.
I wonder if it has anything to do with the purity of the melatonin?

I've added one reference to this post, about high-dose melatonin in treating epilepsy. But in general, such high doses seem to be in uncharted territory with respect to knowing potential risks vs. benefits.

Another problem is quality control of over-the-counter melatonin. Here's a reference to an old article about contaminants found in commercial preparations of melatonin:

It is a good idea to stick to a manufacturer which has a good reputation. Some brands might possibly have higher quality control standards than others.

Interesting post. I suspect that lack of truly bright light in our increasingly indoor lives is a factor in a lot of mood related problems. It seems our offices are in fact quite dark (and most people are inside most days).

Here's a link to a longer 'booklet' on light and depression (also written by an MD). I'd be curious for your thoughts on his piece at:

It would be nice to know what kind of cross-cultural studies have been done on light exposure, depression, and sleep disorders if someone out there is familiar with any...

Thanks for the link to the article. I think it's a good article. I just skimmed it now.

There's one thing I wanted to add about UV damage from daylight exposure: there is not only a risk of developing skin cancers from sunlight exposure (despite the beneficial effect from UV rays increasing vitamin D production in your skin), but also there is increased risk of cataracts and macular degeneration from UV exposure to the eyes.

The benefits of bright light do not require any UV exposure--they just require brightness in visible light wavelengths. A way to protect your eyes outdoors is to wear clear or lightly tinted sunglasses. These would substantially reduce UV exposure to the eyes, while still allowing enough brightness. Some contact lenses also block UV rays--if you wear contacts, I would strongly recommend these.