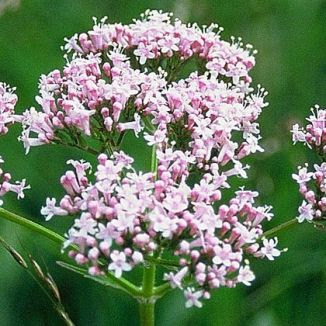 Valerian is a perennial flowering plant native to Europe. Its sweetly-smelling flowers have been used to make perfume. Extracts from valerian root have been used as natural remedies in the treatment of insomnia and anxiety since ancient times.

Here is a review of the evidence:


This is a reasonably-done randomized 2009 study showing no effect of valerian vs. placebo in arthritis patients with insomnia:
http://www.ncbi.nlm.nih.gov/pubmed/19114414

This interesting 2007 study--in which subjects were recruited via a TV health program, randomly mailed placebo or valerian, with results collected on-line--showed a very slight improvement in symptoms with valerian, with no differences in side effects, compared to placebo. Subjects in the valerian group took 3600 mg of Valeriana officinalis one hour before bedtime, for 14 days. Perhaps the most significant bottom-line result from the study to report here is that 9.1% of the valerian subjects reported feeling "better or much better", compared to 3.7% of the placebo subjects, after the end of the study period.
http://www.ncbi.nlm.nih.gov/pubmed/17940604


Here is a 2007 review from a sleep medicine journal, concluding that valerian is safe but not effective in the treatment of insomnia:
http://www.ncbi.nlm.nih.gov/pubmed/17517355


Here's a 2006 Cochrane review, showing no evidence of valerian helping with anxiety disorders (mind you, the amount of data is very small):
http://www.ncbi.nlm.nih.gov/pubmed/17054208

Here's one positive 2005 study from Sleep, showing a modest benefit in sleep parameters and quality of life, from 28 days of a valerian-hops combination, compared to placebo, in the treatment of mild insomnia:
http://www.ncbi.nlm.nih.gov/pubmed/17054208

There are some other articles of dubious quality, which I found in some of the herbal medicine journals.

There could be dangerous interactions between valerian and other medications:
This is a case report of side effects with valerian + lorazepam:
http://www.ncbi.nlm.nih.gov/pubmed/19441067


In conclusion, I am not impressed with the evidence about valerian. It does appear to be quite safe. Mind you, there does not appear to be a good evidence base about possible dangerous interactions with other compounds. I recommend avoiding it, or using it with extreme caution, if you are taking other psychotropic medications. It may have modest benefits for some people, but for the vast majority the evidence suggests that it does not differ from placebo.

Valerian-based perfumes or scented oils might be pleasant and safe to use as aromatherapy for insomnia or anxiety, in conjunction with other relaxing activities.
Posted by GK at 6/12/2009