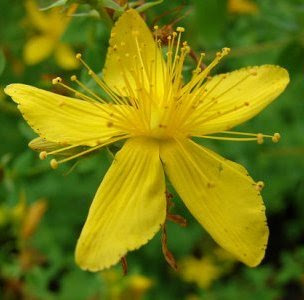 St. John's Wort is a herbal antidepressant. Its mechanism is not well-understood, and at this point is in the realm of speculation, but may involve multiple compounds rather than just a single ingredient (one of the many ingredients in St. John's Wort extracts, for example, is hyperforin).

There is an evidence base in the research literature, supporting its use. However, I find many of the articles to be published in minor journals, and to be of questionable quality.

I will restrict my present survey to a few studies that I consider to be of higher quality:

I note that this review was written by authors from a "Centre for Complementary Medicine Research" in Germany. It may be that researchers at such a site could have a biased view in favour of complementary therapies.

This review from the major journal BMJ in 2005 gives much less enthusiastic conclusions about St. John's Wort:
http://www.ncbi.nlm.nih.gov/pubmed/15684231

It gives a rigorous analysis of the data, and concludes that there is evidence, mainly from older, smaller, lower-quality studies, that St. John's Wort is beneficial compared to placebo, particularly for mild to moderate depression. More recent, larger, more rigorous studies, and studies including patients with more severe depression, show smaller treatment effects.

It does strongly emphasize that different preparations of St. John's Wort may differ in quality, especially since it is an over-the-counter product in most places, and therefore may lack the guaranteed quality control of regulated pharmaceutical products.


Here are links to 2 carefully done studies from 2001 and 2002, published in JAMA, showing no therapeutic benefit of St. John's Wort. The first study compared only with placebo, the second study also compared with sertraline, an SSRI--in the latter study the sertraline actually didn't do well against placebo either! I have to wonder if particular samplings of depressed patients are relatively less treatment-responsive compared to placebo, for a variety of reasons. Also, it may be that some preparations of St. John's Wort are more effective than others:

Here is a link to a recent German study showing that people who respond to St. John's Wort have lower rates of relapse, compared to placebo, if they continue to take it for a year:
http://www.ncbi.nlm.nih.gov/pubmed/18694635


There are some interactions St. John's Wort may have with other drugs; mainly the concern is that St. John's Wort induces the liver to metabolize other drugs more actively, therefore reducing the levels of other drugs. This could be a danger for some people. Here is a reference about this:
http://www.ncbi.nlm.nih.gov/pubmed/15260917

There is a poor evidence base looking at the safety of combining St. John's Wort with other antidepressants, but there are a few case reports of possibly dangerous states such as serotonin syndrome.

I will add to this posting later, but for now I would say that St. John's Wort is probably quite safe for most people, and is probably easier to tolerate (in terms of side-effects) than prescription antidepressants. It may be effective, for some people, to treat or reduce symptoms of depression and anxiety. It may reduce levels of other medications, including contraceptives, and may interact with other drugs, so these possibilities have to be considered very carefully, and discussed with your prescribing physician.

1)I would add that people should pay close attention to drug interactions with herbs.

For example: St John's Wort can increase the metabolism of OCs and therefore decrease the efficacy of them (which may be especially important for university aged women).

2)Anyone who would like to try St. John's Wart should ask/inform their primary physician first to avoid potentially harmful interactions.

3) Keep in mind that every MD has a different opinion on non-allopatic medicine. Some physicians try to merge allopathic and non-allopathic but others completely disregard herbals and nutraceuticals. Therefore you may want to get a second opinion if need be.

4) Remember that there is usually an additive effect observed when taking St. John's Wart and another antidepressant.

Lastly: I just wanted to mention a little on the regulation of NHP (natural health products)
-The last time I checked all Canadian products that fit under the NHP definition must obtain their product licenses by December 31, 2009 (ie. food (no health claims) vs drug (with health claims). These should be subjected to strict regulation but the decision to market in this way is voluntary. The regulations, standards, efficacy studies and toxicity studies are lacking. There is a lack of safely data,a lack quality control, undeclared ingredients, intentional adulteration, unknown or questionable sources and confusing literature.

Also keep in mind that plant products are use in pharmaceuticals all the time (ie: allopathic phytopharmaceuticals) For example, plants can be a direct sources for therapeutic agents (such as Digoxin), a source for raw materials for synthesis, or the structure of a plant substance can be uses as a model for new compounds. (Please be aware that I am slightly biased here and believe that if there was a magic NHP for any common mental health problems the pharmaceutical industry would jump on it and impose strict regulations upon it to leach as much money as possible from the people who need it. But whatever helps i guess, even if it is a placebo effect.)=)

If you want more info:
-Natural Health Products Directorate.
http://www.hc-sc.gc/hpb/onhp
(This is anticipated to be a stable site with valuable information.)

-Camline.
www.camline.org. (This site has valuable information but its stability is uncertain. It depends on whether good people continue to develop and maintain it. )

-Chandler F. Herbs: Everyday Reference for Health Professionals.
Ottawa: CphA &CMA, 2000.
(This is a very useful reference with credible sponsors. It is limited in its coverage. Its continuing value will depend on regular revisions. )

-National Center for Complementary and Alternative Medicine
http://nccam.nih.gov
(This is anticipated to be a stable site with valuable information.)

A note to GK-
(You may also want to comment on Valerian, the sedative/hypnotic, and Kava, the anxiolytic.)

Potentially, the results could be bias due to conflict of interest but interesting none the less!

As you can see from my post, I'm pretty enthusiastic about encouraging people to give St. John's Wort a try.

BUT the quoted study is written by the "head of clinical research" of Zeller AG, which is the manufacturer of the St.John's Wort extract used in the study. There is an obvious conflict-of-interest problem here. Furthermore, there is no randomization, and no placebo or comparison group.

The study claims to be a "safety study", which supposedly aims to assess side-effects over longer-term use--yet the paper oversteps this bound by making claims about medication effectiveness: here is the concluding sentence in the paper: "Therefore, St. John's wort extract ZE 117 is a safe and effective way to treat mild to moderate depression over long periods of time, and therefore seems especially suitable for a relapse prevention." Such talk is typical of the salesmanship going on by pharmaceutical marketers.

I do think the study adds a little bit of evidence that St. John's Wort can be well-tolerated, and possibly useful, for treating or preventing depression, over longer-term use.

As a final note, I should say that in depression treatment studies, I consider "long-term" to mean 3-5 years or more. 1 year of follow-up is better than most studies, but we really need more studies following patients for at least 5 years to understand preventative effects and long-term safety. There are a few such studies of standard antidepressants, I've alluded to them in a different post.

Pretty much the same conclusions...